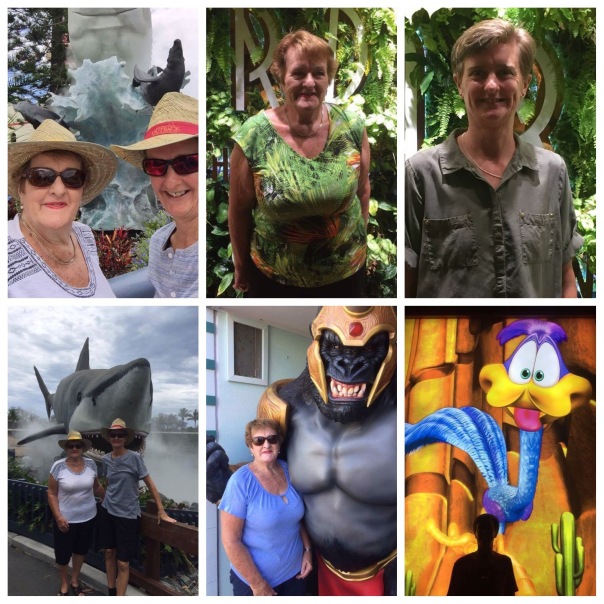 Planning a holiday is all part of the excitement. My planning of our holiday with my youngest daughter was only a few week’s ahead of the trip and we didn’t have the time to get overly excited. We didn’t really care as our destination was to the Gold Coast, Queensland for a few days to relax and enjoy what ever we found of interest for both of us.

Our first day of driving from Coffs Harbour to the Gold Coast complete with our cloths and of course our own pillows was pleasurable and relaxed as most of the Christmas holiday traffic was going south, not north as we were heading.

When we arrived at our rather cheap motel, a so called 4 star property, we couldn’t unpack the car have a shower and head off into our holiday mode to explore as there was a sign on the closed reception door “back at 2.30pm”. Great, so we had to wait around for and hour and half or head off to do some exploring. We chose to explore the rather large nearby Pacific Fair Shopping Centre.

What a great idea this turned out to be, whilst wondering around this enormous shopping centre we discovered a pop-up stand promoting ‘three theme parks for $30 each’. What! We just had to find our more about this, as the normal cost to see three theme parks was $100 each.

It turned out to be promoting time-share for 90 minutes the following day at a beautiful resort only 15 minutes south from our motel. We could do that just to save the $140, as that would be spent on shopping for different type of cloths than what we could buy in Coffs Harbour.

My goodness this so called 90 minutes time-share information turned into over two hours with so much repeating of information that we were both turned off. This was an example of overselling big time. Thankfully my ability to brush off ‘killer salesmen’ especially the sales manager that tried to give us the deal of a lifetime is one of the skills I learnt many years ago. Our task was to walk away with the three theme park tickets, which we had previously purchased at $30 each and enjoy the rest of the day.  Laughter overtook us as we drove away to our first theme park ‘Movie World’.

Movie World was absolutely amazing, one of the hottest days though and without any suntan lotion, not even able to buy any, we were dashing between places where we could get some respite from the heat. One of the locations was watching the Looney Tunes 4D Road Runner & Coyote at the Roxy Theatre.

What a fantastic experience, not only was the movie in 4D, the seats rocked and rolled whilst the seat in front sprayed water on us, so refreshing! Heaps of photos were taken and lots of laughter, just what we needed, especially after having to endure over two hours of time-share overselling. The best buy of the day was our $3 ranch hats and Looney Tunes shopping bags for $2.

That evening, as the previous evening we chose to eat at Jupiter’s Casino in one of the Japanese Restaurants after of course having a look around and a few drinks in one of the cocktail bars. Our meals were cheaper than the bottle of wine and a mixed drink in the cocktail bar. A bar that had gone back in time to the eighties, actually the whole Casino hasn’t moved on in design since the eighties. We did notice a new building being constructed in front of the Casino. Hopefully that is more impressive when complete!

The following day when we chose to go the Sea World it was clouded over, although still very hot. Our ranch hats purchased for $3 at Movie World was our salvation, as there wasn’t many places where you could sit in the shade. Neither of us were that impressed with this theme park; our timing was out with being able to see most of the show stopping events. I must admit we were both thinking about the poor animals being on display, especially the seals and dolphins.

Being our last day before heading back to Coffs we left the theme park and headed to the most popular Harbour Town Shopping Outlet where we could grab some bargains from discount clothing stores. Apart from purchasing some cloths, and bags the best deal of the day was buying Lindt chocolates at 50% off the RRP and relaxing in their coffee shop whilst enjoying the best ever-cold frappe, so delicious!

Our last night’s dinner was at Chiangmai Thai Restaurant Broadbeach.   We thought we would go overboard and enjoy a banquet, the smallest one. Unfortunately it wasn’t small enough as we ended up leaving nearly half of the food.

A vital lesson learnt from our short holiday to the Gold Coast, don’t believe all you read about accommodation on Trip Adviser. Our motel, Burleigh Gold Coast Motel may have had a swimming pool, which put it into the 4 star category, but swimming in it made us feel dirty to the point of hopping out and dashing over to the surf to have a real swim in the ocean. The only thing good about the motel was it did have clean sheets and a place to shower.