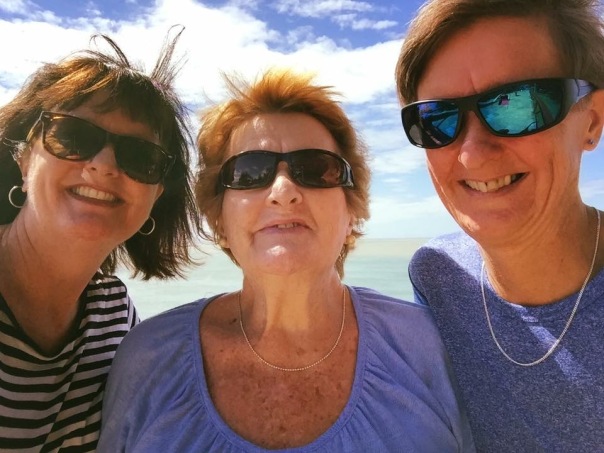 Holidaying on the Gold Coast in January established a great location for planning yet another holiday. This time the plans included both of my daughters for a longer than normal long weekend to explore more destinations, including new shopping locations, like Robina Shopping Centre.

My youngest daughter and I drove to the Gold Coast in cloudy conditions. The tail end of cyclone Debbie swirling down the east coast of Australia attributed to the challenging weather conditions, which were about to hit the Gold Coast.

Our Surfers Paradise Airbnb accommodation apartment included everything we required, our own bedrooms, two bathrooms, a pool, and a spa. The only drawback for me included three flights of stairs to reach our apartment each time we ventured out. Thankfully, my youngest daughter carried most of the initial trips up the flights of stairs with our bags and food supplies.

Knowing my eldest daughter’s flight from Newcastle was going to be affected by the weather concerned me greatly. The plane had two aborted landings at the Gold Coast Airport.

The thirty-five-minute drive to our apartment took over an hour due to the extreme weather conditions. At one stage we had to almost pull over, with hazards lights on we drove through to our apartment where we settled into having a quiet drink and catch up talking until we couldn’t keep our eyes open before retiring to our own bedrooms for a good night’s sleep.

Our first day comprised of a wonderful healthy breakfast prepared by my youngest daughter, then shopping was high on our to-do list. It turned out to be tiring and amazing, as it included Robina Shopping Centre. We all agreed we could just stay there the whole time and forget about doing the tourist ventures. The food hall included every type of delicacies one could imagine, something that we yearned for in Coffs Harbour.

The decision to stay at the Airbnb apartment was organised by my eldest daughter, good choice indeed. She also suggested Uber services when we went out for dinner. The Uber drivers were polite, clean, on time and cheap, compared to the local taxis. Another good decision!

After shopping, swimming, eating, drinking our way throughout Surfers Paradise, which included dinner at Jupiter’s for Chinese and La Rustica for Italian. It was time to drop off my eldest daughter at the airport and for us to start our trip back to Coffs Harbour.

We had no idea how bad the weather ahead of us was going to be, apart from looking up the obvious road conditions weather apps on my mobile. The apparent problem areas were marked with red at certain locations south of Woodburn.

A few kilometers north of Woodburn the traffic came to a halt. It was a long wait before the traffic started to move, only one lane being used for all traffic north and south, hence the reason for the long wait. We could see RMS (Roads and Maritime Services) trucks and vans for many kilometers.

We had no idea of the type of major hazard ahead of us. Flooded roads, major highway roads flooded both ways for many kilometers. At Little Italy we drove through three flooded roads urged on by RMS vans driving alongside us. The heavy trucks ahead of us were causing backwash waves hitting up against my poor Toyota Corolla.

It wasn’t until we came across the fourth flooded road when both of us thought it is too high! We could either go through or turn back. A decision to turn around and head back to higher ground was not an option, so we pushed ahead. Feeling somewhat scared and concerned about the water coming in through my car made us both feel overwhelmed. The comfort knowing if we got stuck the RMS vans were nearby to assist us.

The drive back from the Gold Coast normally takes about five to six hours, our trip this time took over nine hours. Two exhausted, but relieved travelers arrived home safe and somewhat happy to have made it through this hazard of driving through flooded roads.

We were fortunate compared to all the homes and business areas affected by the impact of cyclone Debbie.