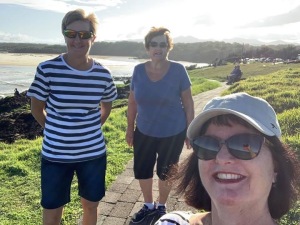 Living and working in Sydney for more than 40 years in senior positions can take its toll on you.

Late in 2007, I decided that life should be better as I enter into my later years of life. With this thought I made the massive decision to relocate to the beautiful Mid North Coastal town of Coffs Harbour.

Coffs Harbour was a location that I had visited many times, whilst working in TAFE NSW as the Business Support Manager, including holidaying or passing through on my way further north.

This was an enormous decision to move away from friends and family to a rural city after living and working in Sydney better part of my life, but I was ready for the challenge.

With research and planning underway, which included suitable housing locations, economic status of Coffs Harbour, before resigning from employment and packing up my entire life to head north to re-establish myself. I was ready for my new venture.

Choosing the right house was an important decision. I looked at several properties without success until I found the right location with the desired aspects by a Real Estate Agent that listened to my requirements, something that was missing with most of the local agents.

Finally, a house that from the outside looked perfect, even though it was in the middle of the wet season and it was raining extremely heavy on the inspection day. It ticked all the boxes and more, after viewing the house for 20 minutes I made an offer.

Having to wait for over an hour for the vendor to agree to the offer was arduous, but worth the wait as the offer was successful.

My first day in Coffs, without any furniture and residing in a motel, I met an amazing couple sitting next to me in a coffee shop at Homebase. The lady came over to me after overhearing my conversation with my niece saying; “Danielle, I have arrived in Coffs, without my furniture, staying in a motel and I just love the decision to move here”. After finishing my phone conversation the lady said; “I overheard your conversation and remembered that we, her and husband, came to Coffs 23 years ago for a holiday and fell in love with it, went back to Melbourne sold our house and now live here. We would love to invite you over to our house for coffee”. I thought to myself, what a wonderful welcome to the Coffs community, and of course, I agreed to contact them.

It took only six months before my youngest daughter took the risk of relocating too, leaving a stable job in Sydney and sourcing new employment, which she managed to achieve all within two weeks of relocating to Coffs Harbour. Despite being told by locals she wouldn’t get a job, she proved them wrong.

When you relocate to a town that has on average more than 2000 people relocate each year, you know you are living within a progressive location. I needed to engage in whatever project I could to assist with the progression.

Within the ten years of living in this livable regional city, I have seen the implementation of the National Broadband Network (NBN); thankfully to my home, the installation was fiber to the house. The development of Medical Specialist Centre attached to the Coffs Harbour Health Campus, currently building a Medical Research Centre at Southern Cross University, the build of a new Court House and Police Station, redevelopment of CBD main shopping centre now called Coffs Central, increase to the size of the Park Beach Plaza Shopping Centre and Toormina Shopping Centre and one of the most outstanding developments was the redevelopment of the Jetty Foreshores enabling improved community accessibility.

One area of great interest for me is the development of a new Arts & Cultural Centre, which should commence the build in late 2020.

With the above type of developments and several new housing developments around the Local Government Area has given rise to the population now up to 76,000. I believe relocating to Coffs Harbour is one of the best decisions I have ever made and a bonus is being able to give back to the community by volunteering my services on various worthwhile projects to assist this city to prosper.

The best part of living the perfect life is the opportunity of assisting others who are also new in town, including my sister who relocated here twelve months ago to take advantage of this wonderful new way of life.